The areas between the fibres of a bundle head and between the individual heads in the field unit can be filled with multiple images with an appropriate offset. In this way, an almost completely closed recording of the respective observed section is possible.

The specially developed CCD chips in the spectrographs are elaborately cooled by nitrogen in order to be able to effectively use the few usable photons that are delivered from the sky via the fibres.

The aim is to "scan" the sky on a large scale. However, it is not stars and planets that are captured, but rather the search for galaxies in the dark night sky. Using the spectral evaluation of the pixels and their corresponding redshift, it is possible to determine the distance and speed of the galaxies in the expanding universe.

From the arrangement and staggering of the galaxies in deep space, scientists hope to gain further insights into dark energy. This experiment is known as HETDEX (Hobby-Eberly Telescope Dark Energy Experiment).

back to the projects 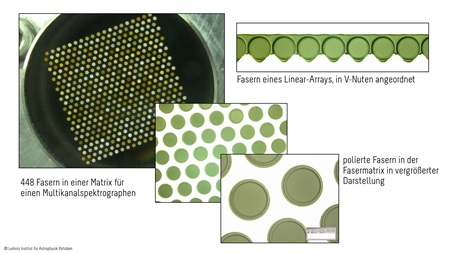